Located only 13 kilometers from Dresden, the very large Moritzburg hunting lodge impresses with its 200 rooms from afar. It´s more than a lodge, it´s rather a huge palace. Gentle hill country, extensive forests, the castle on an island in a large pond, all of which is only a few minutes’ drive from the big city, that’s good for the soul. When the weather is calm, the magnificent ensemble is reflected in the water, just as Saxony’s ruler Augustus the Strong wanted it to be. Because as a young prince he visited Venice with its canals and reflections, and that’s when his heartfelt desire for palaces and castles on the Saxon “Canal Grande” arose. Well, this is a pond as big as a lake. It is traditionally fished in autumn, which “causes” a well-known, very popular folk festival.

I will guide you through the exhibition to baroque courtly living culture (not boring, I promise!) showing the largest existing leather wallpaper decoration worldwide and the impressive antler collection with the “world record – red deer antler”.

By the way, you’ve all been to Moritzburg before. If you’ve only seen “Three Hazelnuts for Cinderella” once. Parts of the legendary film were shot here.

On request, we can also drive and walk to the picturesque Pheasant palace on the large pond, where gondolas once rode. I tell you about a Russian – Saxon – Ottoman “sea battle” on the pond under the command of Count Orloff and much more …

The excursion lasts between three and five hours.

It is possible to travel there or back with the historic narrow-gauge steam train “Lößnitzdackel” (“Lößnitz sausage dog”) from 1884. 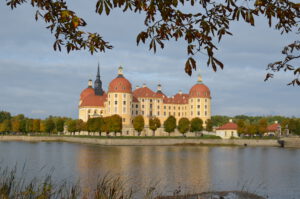